Helmetlessness? Is that a question? 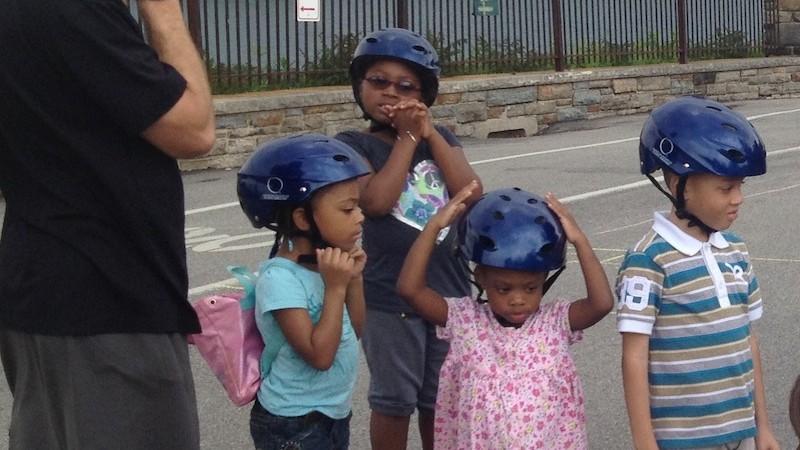 Everyone’s got an opinion about cycling and helmets. Most folks that live in the United States agree that wearing a helmet during your ride is not a terrible idea.

But there is also the side that swears the brain bucket is unnecessary, once the kid turns 17 of course when it’s no longer mandatory in Maryland. And I’ve seen the gangs of under 17 year olds wheelying down the street sin casco, all the more free ‘cause of it.

Just the other day at Downtown Partnership’s bike happy hour, a guy from Amsterdam boasted how NO ONE in his homeland considers donning a helmet as they’re swinging a leg over their steed on the way to work, school, or play (which they do, a lot).

He went on to say that helmets are not as important there, because motorists are not only aware of cyclists, but the motorists ARE cyclists, that happen to be driving a car at that moment. They actually (gasp!) respect cyclists and pedestrians, and therefore yield to them accordingly. Oh, and they have bike lanes there with bike signals, and infrastructure and stuff.

My husband, let’s just call him, mm… “Mark”, is in the no-helmet camp. He feels that wearing a helmet screams out to motorists that thus mentioned rider is a lycra-leaning (and therefore bleeding-heart, left-leaning) bike geek, recreationally riding to some organic veggie joint to convene with other scrawny helmet lycra people to wax dream about complete streets and clean air. And my husband’s a little right.

The helmet, he feels, is threatening to enemy car drivers, who deftly alternate BK chicken finger with text finger even after the light turns green. Roads are for working people. Not recreatin’ geeks that don’t even have to ride because of a DUI!

We at Bike Maryland emphatically teach the importance of wearing a helmet on every ride, especially because many motorists here are not yet avid cyclists, like in Amsterdam. But the most important thing we teach the adults at workshops and kids at our rodeos, is to safety check their bike and follow the rules of the road. That way they’ll hopefully never have to put that helmet to use.

Still in doubt? Just put really cool stickers on it.