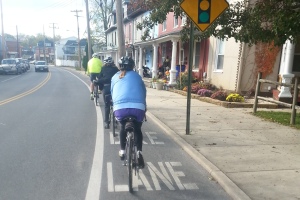 Not long after I started at Bike Maryland, we were asked to review a Bicycle Friendly Community application from Hagerstown, Maryland. At the time, we had no basis for reviewing the application because, sadly, we really didn’t know what was happening in Hagerstown. Looking over the application, we were amazed: Hub City Bike Loop, lots of events, willing planners and engineers…. The app piqued our interest and we knew we had to get to Hagerstown sooner than later.

We scheduled a visit with Dick Cushwa (Cumberland Valley Cycling Club, Maryland Pedestrian & Bicycle Advisory Committee) to coincide with the Hagerstown Bicycle Advisory Committee (BAC).  Meeting Dick, Joyce Martin, Jennifer Fettig and Mike Mittel in the parking lot of (the now closed) Hub City Cycles, we started with a spin on the Hub City Bike Loop.  Three years old, the Hub City Bike Loop (picture left) is a signed and marked bike route that circles the city connecting parks, historic locations, residential areas and commercial centers.  Mike provided us with a detailed tour on the history of the city and it’s bike culture.  Yes, Hagerstown definitely has a bike culture!  There’s even a BMX course just off the loop.

At the BAC meeting after the ride, we met with city engineer Rodney Tissue and planner Alex Rohrbaugh who presented the brand new Hagerstown Bike Map!  The group also shared a poster of this year’s Bike Month Celebration (chock full of activities), plans for a trail connecting the Loop to downtown and other bike lanes in development around Hagerstown.  We traded notes on possible bike boxes and intersection improvements where crossings can be tricky. 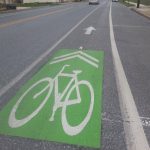 Throughout the day, Dick was also singing the bike praises of nearby Williamsport, Maryland.  With some extra time we took a quick spin through Williamsport and were also surprised!  Bike lanes, with some green paint (picture right), on East Potomac Street (U.S. Rte. 11) leading to and from the C&O Canal and a connecting bike route along Commerce and Church Streets.

Hagerstown may be in Western Maryland, but it’s only an hour’s drive from Baltimore.  We highly recommend that everyone go for a visit to this (hopefully soon-to-be official) Bicycle Friendly Community!  Whether you want to loop around the city or connect into the C&O Trail, Hagerstown has much to offer.