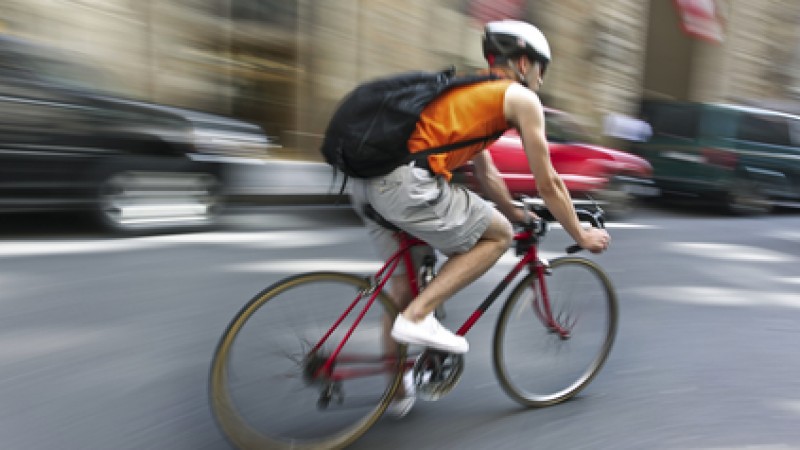 If you live in an urban city, your daily commute is most likely accompanied by pedestrians, skaters and bikers all traveling in directions creating the bustling energy of city life.

Drivers and bikers can clash as communication and awareness of the laws and road courtesies become skewed in the mix of “he said, she said.” Like it or not, bikers aren’t going anywhere.

According to the National Bicycle Dealers Association, in 2009 the American bike industry sold 5.6 billion in bicycles. In fact, three times as many new bicycles are sold in the US each year than cars. Cities like Seattle, Portland and San Francisco are growing their local bike culture making it safer and easier for people to make their commute by bike. As it saves families money and reduces the amount of pollution and traffic in big cities. The National Highway Traffic Safety Administration (NHTSA) said in 2008 that 47 percent of Americans said they want more bike facilities in their communities.

As biking dominates as a popular commute, as a driver it’s best to take a proactive approach and learn about simple ways to reduce your chances of bicycle collision.

The cardinal rule to interacting with bikers on the road is that it’s better to be safe than sorry. In the unfortunate event of an accident you will probably be at fault and may be looking at a license suspension or even the loss of auto insurance coverage. When in doubt, it’s best to be cautious and defensive. Have the same state of mine approaching cyclists as you do pedestrians. You wouldn’t try to beat a street walker to a turn, right? One wrong move can be fatal to a cyclist. Have patience and give them a few extra seconds to pass or make a turn.

Respect for Drivers and Bikers

Leave bike lanes for bikers, don’t treat them as parking spots. Some cities like, Seattle, block bike lanes off with physical cement dividers, Traffic Bollards or by painting lines and symbols on the streets. Sometimes bikers are forced to stray outside of their designated lanes due to hazardous road blocks like debris, pot holes or drainage. These may not seem like something drivers would be concerned about but these small things can be dangerous to urban bikers.

Understand and Be Aware

It’s important for drivers to understand that in urban cities, Bikers are Part of Traffic Flow, not separate from it. They should be treated as an equal on the road but approached with patience and an understanding that they are much more fragile and a wrong turn for them can make a much more severe impact than a wrong turn for a driver.

When you are parking in a designated roadside parking space beware of bikers passing by. Bikers getting “doored” by drivers is a common hazard when an unsuspecting biker collides with a an open car door. Drivers should look for bikers before opening their doors, as bikers may not always be able to see a driver in the vehicle, or be aware that the driver is about to open the door.