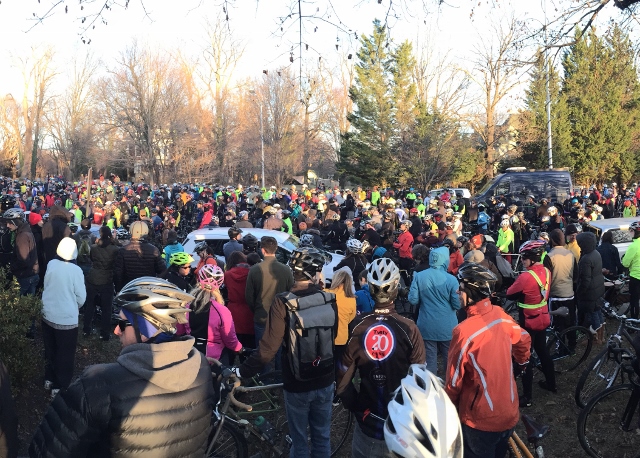 Yesterday, cyclists from across the region rode in solidarity to commemorate the lost life of fellow cyclist, Tom Palermo. Bikemore and Bike Maryland organized the memorial ride as a show of support for Tom’s family and friends. Almost 800 people RSVP’s to the event’s Facebook page. We do not have an official count of the number of attendees, but it was likely close to, if not over, a thousand. A sea of cyclists in high-visibility jackets and flashing red lights consumed University Parkway and were enough to stop motorized traffic along Roland Avenue near the crash site. Those cycling were joined along the route and at the memorial site by community members bearing candles, baked goods, and flowers along with the friends and family of Tom who wished to pay their respects.

This week we are mourning Tom’s loss and the memorial ride was a chance to celebrate his life. The circumstances surrounding the crash are disturbing on many levels and will require a thoughtful, diligent investigation. Of note, State’s Attorney Gregg Bernstein rode along the hundreds of bicyclists at Tom’s memorial and has expressed his understanding of the gravity of the tragic event. The absence of charges and status of the investigation has been a point of contention in the bicycling community and we urge patience and respect, however difficult, in order to allow the authorities to do their job. Bike Maryland is working closely with Bikemore and local leaders to ensure that Tom’s passing is not in vain. We will continue to work towards improved safety conditions for all road users by improving safety for cyclists.

A note of appreciation to Reverend Scott Slater and Sharon Tillman at the Episcopal Diocese of Maryland for their support during this trying time. The Diocese opened their church for prayer an hour before the ride and offered their parking lot, which was adjacent to the ride start, for those attending the ride.

Special thanks to County Councilman David Marks, City Councilwoman Mary Pat Clarke, and Department of Transportation Director William Johnson for attending yesterday’s event. Most importantly, I want to thank those who came out on a cold, New Years Day to ride. The event demonstrated how we can support each other peacefully in a time of loss, grief and anger.