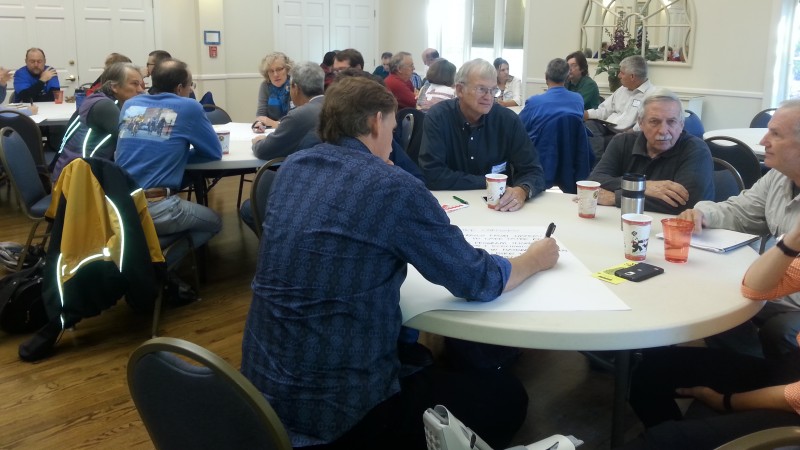 Advocates from across the state gather in Ellicott City

On Saturday, November 8th, leaders in Maryland’s bicycle advocacy movement met in Ellicott City for what was billed as a Legislative Planning Session.  With the 2014 General Elections complete, Bike Maryland took the opportunity to plan what legislation to pursue during the 2015 General Assembly session and beyond.  In years past, Bike Maryland has taken a more reactive approach to passing bike-related legislation.  Previously the Bike Caucus has introduced and passed meaningful legislation, but more recently bicycle champions have used an ad hoc approach which has jeopardized the bike lobby’s political capital. Bringing together bike advocates from across the state to identify common goals and set the stage for implementation was long overdue.  While many in attendance knew each other from other bike related events, this forum allowed for an open exchange of ideas.  The input offered during this 3 hour meeting provided Bike Maryland action items to create a more bikeable state with the support of local level partners.

While the meeting’s intent was to identify which legislation, if any, to pursue in 2015, the input offered by the 40+ in attendance reflected a different set of priorities. The local advocates needed support, collaboration and direction from one central statewide organization to foster positive change for cyclists in their communities.  (Fortunately, Bike Maryland has already taken steps to supply that support.)  With this input, the change in gubernatorial administration and  approximately one fourth of the General Assembly beginning their freshman year, no bike-related legislation will be pursued by Bike Maryland during the 2015 General Assembly session.  Over the next year, bike advocates are encouraged to take the following steps:

While no legislative agenda will be pursued in 2015, the above action items will set the stage for greater success in following years.  Bike Maryland will continue to work with bike organizations and businesses across the state to make our case for more and better bike conditions.  Below is the TOP 10 LIST from Saturday’s Planning Session:

Special thanks to Baltimore County Councilmen Tom Quirk and David Marks for attending and offering support and guidance.