On Thursday August 21st, Emily Ranson (Bike Maryland Advocacy Coordinator) and I (Nate Evans, Bike Maryland Executive Director) visited Western Maryland to meet local bike advocates and support the city’s plan for bike lanes.  The City of Cumberland’s engineer and project manager John DiFonzo requested Bike Maryland’s attendance at a community meeting to share the benefits of improved bicycle infrastructure.  We gladly took this opportunity, not only to support the city, but also to meet with those who will be using the bike lanes most frequently.

After a brief visits to Bike 123 in Mt. Airy and the Bicycle Escape in Frederick, we arrived at the Cumberland Trail Connection.  This bike shop is strategically located at the junction of the C&O Canal Towpath and the Great Allegheny Passage Trail, which combine to make one of the longest continuous bike paths in the nation.  From here, we took a bike tour of Cumberland hosted by Brett, Jack and Larry.  Heading north from downtown, we took Frederick Street where the new bike lanes are planned.  This uphill section of road with two vehicular travel lanes planned to convert the the right hand lane to a bicycle travel lane.  From here, we meandered along quiet roads until returning towards town via Bedford Street.  Bedford, the southbound couplet to northbound Frederick, was a few feet too narrow to have a designated bike lane.  After a little climbing, (and acclimating to the elevation), the downhill glide into town allowed for pacing with motorized traffic.  Back in town, Jack, Brett & Larry (pictured below) showed us some other bicycle related improvements they’d like to see including a rehabilitated bridge to the GAP into north Cumberland, a BMX/Skate park and mountain bike trails in Constitution Park.

The evening’s community meeting was well attended by many concerned citizens both for and against the planned bicycle improvements.  The bike lane project is funded by a Maryland Department of Transportation Bikeways Grant, which has funded other bike projects across the state.  The arguments against the bike lanes were the same heard in communities across Maryland, the United States and the world:  “Why make improvements for a handful of cyclists?”, “We’re not ready for bike lanes yet” “I’m a bicyclist, but….”  The two hour, standing room only meeting was well moderated by John DiFonzo who allowed everyone to offer their opinion and raise questions.  By the meetings end, not everyone was on board with the changes, but many fears and concerns were allayed.  While many local cyclists attended to support the bike lane project, the comment that stuck with me afterwards came from Mrs. Hutcherson:  “I want Cumberland to be a bike friendly community!”  Cumberland has benefited economically from the the C&O/GAP tourist traffic, and now it is time for bicycling infrastructure that supports residents as well. While Bike Maryland has traditionally supported bicycle projects in central Maryland, we will now become more active in all Maryland regions; supporting any bicycle program or infrastructure that gets more people on bikes, more safely, more often.  It was my pleasure to visit Cumberland and support the Western Maryland Wheelman in their mission. 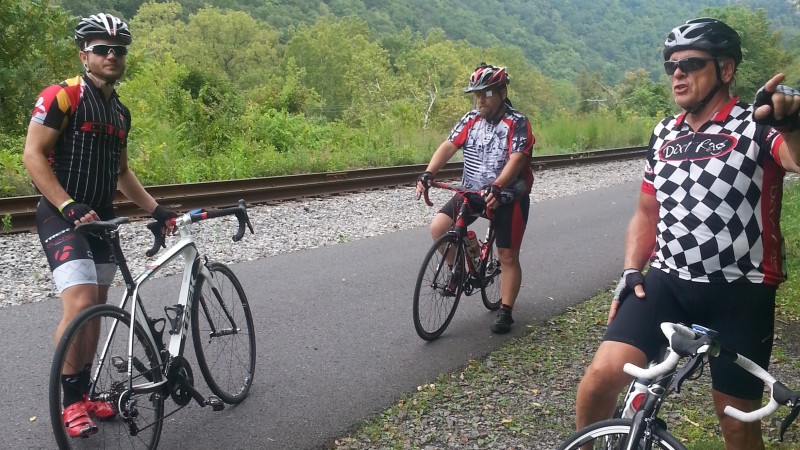