Randonneuring – A Long Way to Cycle

This Saturday, as many Maryland cyclists took to the road to celebrate unseasonably warm February temperatures, I headed out on a multi-mile adventure with six other cyclists from the DC Randonneurs, our local randonneuring club. Our tires hit the pavement at 7 AM for a 130-mile adventure north from Woodbine, MD to Dillsburg, PA. We were participating in the sport called randonneuring, or long-distance endurance cycling. 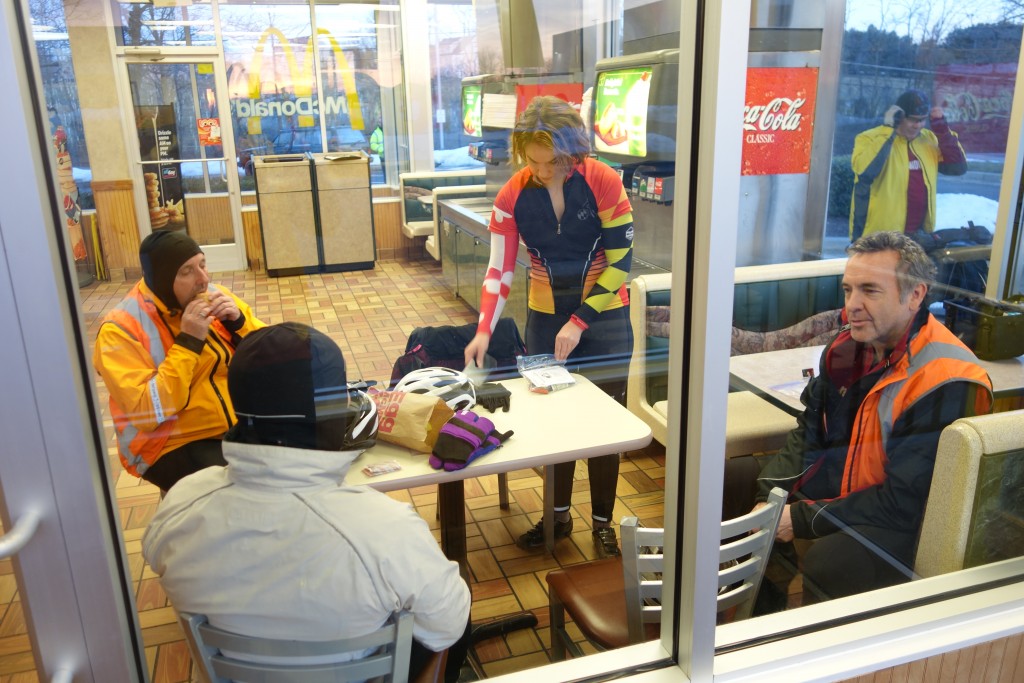 We gathered at the Woodbine McDonald’s for coffee and breakfast.

Randonneuring is an interesting sport that does not celebrate going fast. The idea is to complete a series of brevets: a 200 km, 300 km, 400 km, and 600 km in a year. If you complete the series, you are eligible to attempt a 1200 km, in special years the Paris-Brest-Paris in France. The sport gives you time limits to complete the journey, but everyone who completes it in the time allowed is considered just as much as a winner. It’s the miles that matter, not how fast you can get it done.

Saturday’s ride was not an official DC Randonneur brevet, but instead a permanent, which is a predetermined route that is managed by a person, and then we ask permission to ride at a time we pick. I was the least experienced randonneur on the ride by far – most of the group had been riding long distances for 10+ years.

We headed straight north from Woodbine, through Gettysburg National Military Park. We stopped at a 7/11 in Gettysburg for our first “control” – a place where we are required to stop and get proof that we were there. Depending on the route and if the ride is organized by the club or not, this could be an answer to the question on your Control Card, a receipt, or the signature of the clerk.

We paused for a photo op in Gettysburg.

Randonneuring is unsupported, which means that we are on our own when out on the road. Even if the ride is put on by the club, the emergency number makes it clear that “Tired is NOT an emergency.” There are no rest stops and no SAG vehicles to help you get back on the road. On our way to Dillsburg the unsupported nature of randonneuring was apparent as we passed a “Road Closed in 1 Mile” sign. The bridge over the river was out, and after some discussion and shying away from trying to clear the four foot gap, we decided that we needed to find a detour. 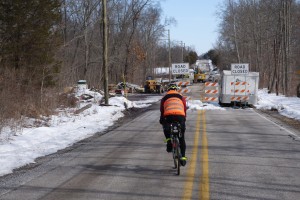 We thought we could sneak by the road closure, but the bridge was actually out.

One of the struggles with randonneuring is preventing the bonk – the low energy crash you feel when you burn through your calories. I started getting close to that feeling as we approached Dillsburg, my stomach grumbled and I knew that I didn’t have many miles left before I would start crashing. The name of the game is to eat before hungry, and I had messed up. 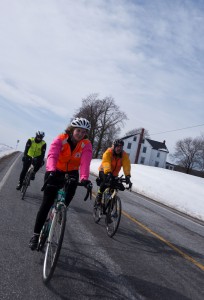 The bridge detour was quite nice, although we did add another 7 miles!

As we sat at the Sheetz in Dillsburg, I thought back to something someone had once said to me when I first started getting into randonneuring. “Randonneurs are the only people I know who will sit down and have a full meal in the middle of a ride,” they had said, as though that was so strange. But after six hours on the bike with another six to go, it makes sense that we have to stop and get actual food. I wolfed down a chicken sandwich and mozzarella sticks, which were delicious. 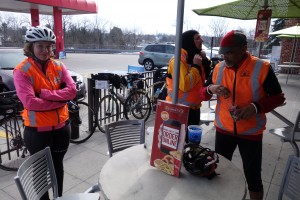 The ride was a blast. We definitely weren’t fast – it ended up taking us a little over 13 hours to complete the ride, but at the end all that matters was that we finished. 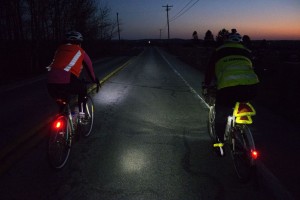 The next official DC Ranndoneur ride is on March 19th in Virginia. See more photos from the ride at Bill Beck’s Flickr page. Learn more about randonneuring at the DC Randonneur club page.

Any way is a good way to ride!