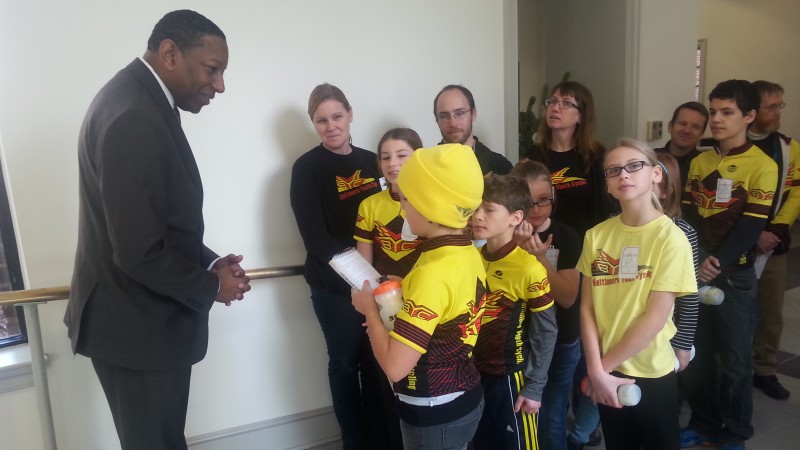 Bicyclists from Deep Creek Lake to Ocean City converged on Annapolis on Wednesday for our annual Maryland Bike Symposium. Nearly 200 cyclists took the day off of work and out of their busy schedules to join us for this important day.

The morning started off with a bang as Maryland Department of Transportation Secretary Pete Rahn announced that after years of pleas from cyclists in Maryland and the eastern seaboard there will finally be a way to bike across the Susquehanna river between Havre de Grace and Perryville. This has been a tireless effort, and we are glad that it has finally payed off. Bicyclists will be allowed to use the Route 40 Bridge. No, this is not the separated access for bicyclists and pedestrians we hope to one day have, but for now, for 2016 we have something.

While big announcements and grant information is great, the reason so many cyclists convene in Annapolis one day a year is to meet with their legislators. While some delegations set up meetings, we were fortunate that many of our attendees found their representatives in offices and hallways to talk bikes and priorities. The big one this year? Three feet on every road. Young teammates on Baltimore Youth Cycling learned first hand about lobbying when they ran into Chairman Barve in the lobby!

In the afternoon, fresh from meeting with representatives our cyclists returned to witness first hand the Maryland Bicycle and Pedestrian Advisory Committee (MBPAC)   MBPAC includes citizen members and representatives from different state agencies who work to improve walking and biking conditions across the state.  During this session, State Highway Bicycle & Pedestrian coordinator Tony Campbell announced that the State Highway Administration (SHA) will oversee the implementation of a statewide bike network; a project Bike Maryland has been advocating from some time.  SHA encourages people who bike to take this online survey to help identify suitable routes.

We followed it all with the next generation – getting kids on bikes. Brian Kopp from Bike Maryland detailed the success of our Bike Minded Safety Program in Anne Arundel County Schools. Our program relies on super volunteers to help us make those contacts, and you can help us get this institutionalized approach in your county.

Joe Nalley brought some of the kids and parents from Baltimore Youth Cycling up to talk about their first year. Last year at the Symposium Joe had a couple of posters and an idea. Now BYC is an organized and growing team, known as The Swarm for their yellow and black jerseys. The kids are growing not just as atheletes, but are also learning mechanics, safety, and advocacy as they become members of our bike community.

Thank you to Toole Design Group and McCormick Taylor for sponsoring the 2016 Symposium.