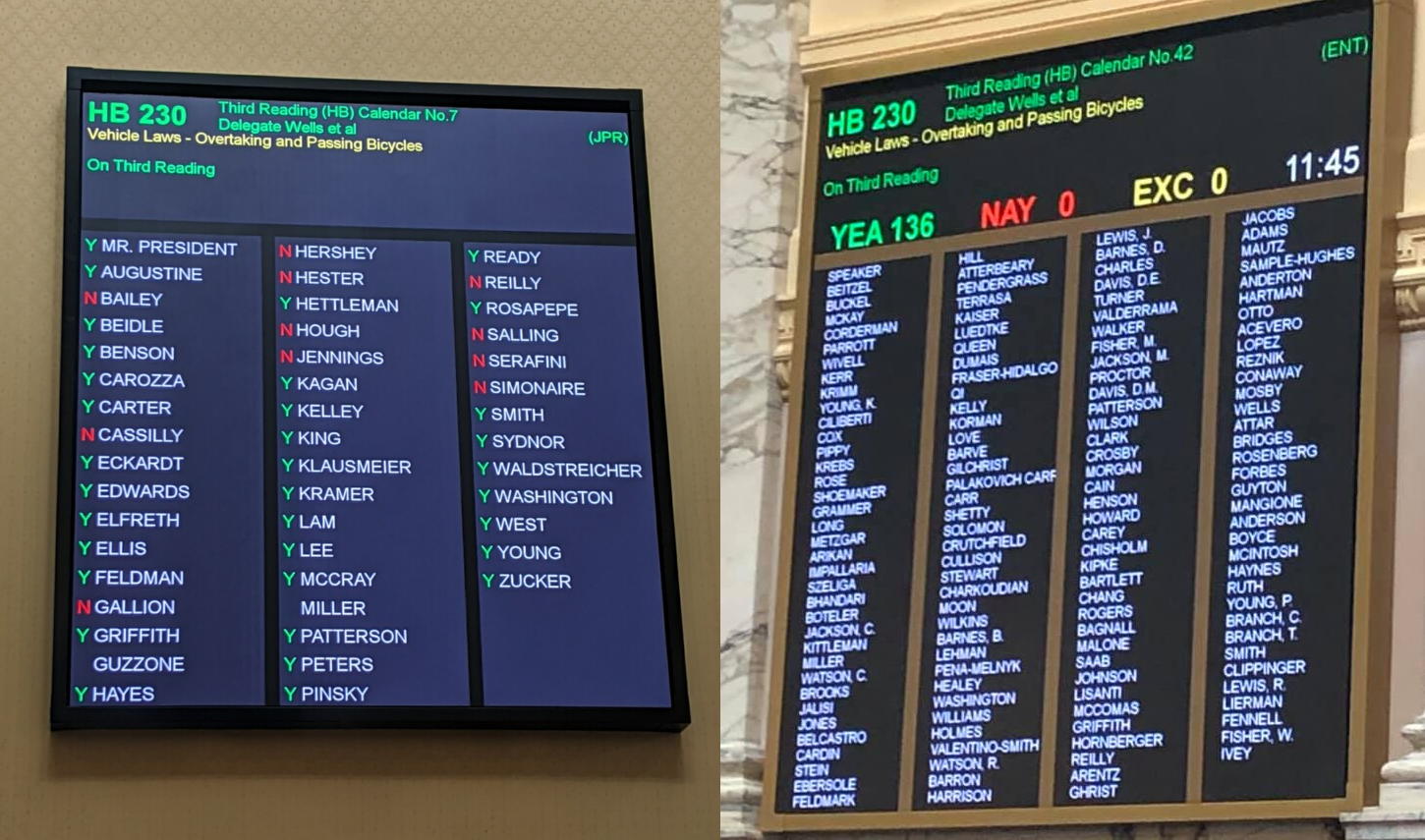 As you are no doubt aware by now the COVID-19 pandemic forced the 2020 Maryland Legislative Session to end several weeks early.  Despite the sudden ending to the session, Bike Maryland had a very successful session advocating for you and all of Maryland’s cyclists.   We are excited to share our session and post-session successes below.

PROTECTING CYCLING AND CYCLING INFRASTRUCTURE DURING THE PANDEMIC

On March 23rd, after the legislative session was cut short, Governor Hogan closed all non-essential businesses. Bike Maryland, along with a team of other cycling advocates from around the state including BikeMore, Bike AAA, and Rails to Trails Conservancy, immediately began working to protect cycling and cycling infrastructure during the pandemic.  Cycling remains a critical transportation option for many essential workers and an important recreation option for the rest of us.

Due to our work in those early days of the pandemic,  when Governor Hogan formally issued the Stay at Home executive order he allowed bicycling both for transportation and for recreation.  Additionally, bike shops are considered essential and allowed to remain open.

In 2010, Bike Maryland successfully led the campaign for passage of the 3-foot law which required vehicles to give three feet of space whenever passing a bicycle on the road.  The bill, when passed included a narrow road exception. Unfortunately, that meant that Maryland’s 3-foot law did not apply on many roads where bicyclists ride.

Starting in 2012, and annually after that, cycling advocates, lead by Bike Maryland, introduced legislation to eliminate the narrow road exception but were unable to get it passed..

2020 was the year where we finally were able to pass this bill through the legislature. We delayed celebration to make sure Governor Hogan did not veto the bill and are thrilled to let you know that a complete 3-foot law is now the law of Maryland!

It is worth noting that although the Senate has been the chamber where this bill died the last several years, this year it passed committee 12-1 and then passed the entire Senate 38-8 seeing broad bi-partisan support!

Once again, our advocacy in Annapolis prioritized closing the large gap in Maryland law in punishment between a standard traffic ticket and gross negligence. Currently, when a vulnerable road user is struck and injured by a motorist who violated the law but not enough to be classified as criminal or gross negligence, the punishment is a traffic ticket! The proposed bill would have required a motorist who breaks the law and seriously injures a vulnerable road user to appear in court and be subject to a larger collection of potential penalties including fines, license suspension, community service, and driver education.

Unfortunately, while we gained more support than ever before for closing this gap and saving the lives of cyclists, first responders, and other vulnerable road users, these bills failed because legislators ran out of time due to the shortened session.  The House bill passed the house just days before the end of the session. The Senate Judicial Proceeding Committee did not have enough time to thoroughly discuss the bill to address members concerns and so the bill failed by never receiving a vote

GOVERNOR AGREES TO NEAR DOUBLE FUNDING FOR BIKEWAYS PROGRAM

Those following along with us during the 2019 legislative session know that in 2019 a bill passed increasing the Bikeways funding from $2 million to  $3.8 million.  We worked in partnership with the Rails to Trails Conservancy and the bills’ lead sponsors, Delegate Brooke Lierman and Senator Jim Rosapepe to get this signature investment in cycling infrastructure across the state.  Then, Governor Hogan subsequently vetoed the bill.
However, right before the beginning of the 2020 session – through the work of everyone mentioned above and including President Bill Ferguson, the Governor committed to funding the Bikeways program at $3.8 million through 2022.

This is a victory for everyone!

Environment & Transportation Chairmen Kumar Barve, at the request of more than a dozen cycling, transportation, and environmental organizations passed legislation during the 2020 session to rename the Bikeways program the Kim Lamphier Bikeways Program.

Simply put, Kim was the epicenter of bicycle advocacy in Annapolis for the past several years.  She was the main thrust behind every significant piece of legislation including the three-foot rule, HAWK lights, the complete streets law for policies in all state transportation agencies, the complete streets law providing technical support for local governments, Vision Zero, and of course last session’s legislation to increase and stabilize funding the Bikeways funding.

Outside of Annapolis, Kim worked tirelessly with local cycling advocates, enthusiasts, and government professionals to help them make their communities truly accessible to all people who are active cyclists or desire to be cyclists in a safe environment.  It is not an exaggeration to say that cities all over our state from the mountains of Cumberland to beaches of Salisbury; from the winding hills of Towson to the suburbs of Rockville; to the historical downtowns of Ellicott City, Bel Air, and Frederick that bicycle infrastructure is better because of Kim. Sadly, last August Kim passed away after a year long battle with sarcoma. Her legacy now lives on through the Kim Lamphier Bikeways Program.

What led to our success during the 2020 Legislative Session? Hard work; tons of hours walking the halls of Annapolis; a committed, enthusiastic coalition testifying at bill hearings; prioritizing and deepening our relationships with legislators and our champions; and of course members and activists like you making your voices heard!